Must Have Foods While in Ecuador

I am a foodie.

I love to eat! Food tastes good. I used to be QUITE the picky eater as a child. I only wanted chicken, hence my mom called me "chicken lady." I guess you are what you eat. As an adult, especially now that I travel a lot, I have been pushed out of my comfort zone to try different foods.

On this Ecuadorian tour, our tour guide went out of his way to ensure we tried a lot of #localdelectables. I was surprised as to how many things #Ecuador specializes in, which all depend on particular cities.

Here are the top food items of Ecuador:

"Ecuador's version of ice cream, #heladodepaila, dates back to 1896 when 16-year-old Rosalía Suárez, of Ibarra, Ecuador, harvested ice and snow down from a nearby peak. More than a century later, it's still made as she first prepared it: A large copper wok is placed in a basin over ice and straw, and filled with concentrated fruit juices (for sorbet) or a cream-milk-egg mixture (for ice cream). Then, the liquid is continuously stirred and spun with a wooden spoon until it begins to freeze, harden, and create a pliable, soft consistency. Street vendors will prepare the helado de paila to order and serve immediately, while most ice cream shops make it in advance and store in low temperature freezers. Popular flavors include blackberry, mango, chocolate, coconut, pineapple, tamarind, passion fruit, and unusual local fruits including guanábana (soursop) and sour naranjilla (which looks like a baby orange, but has a markedly acidic flavor). The original Doña Rosalia's ice cream parlor is still owned by the Suárez family in Ibarra."

We stopped by an helado spot as we drove out of Quito. We were able to see it made in front of us and take part in the process. Trying it on the spot after it was made, it was so soft and smooth. The flavors that are most typical are the ones that are fruity. The photo on the bottom left hand corner represents the most traditional flavor of #helado, blackberry and #guanábana. 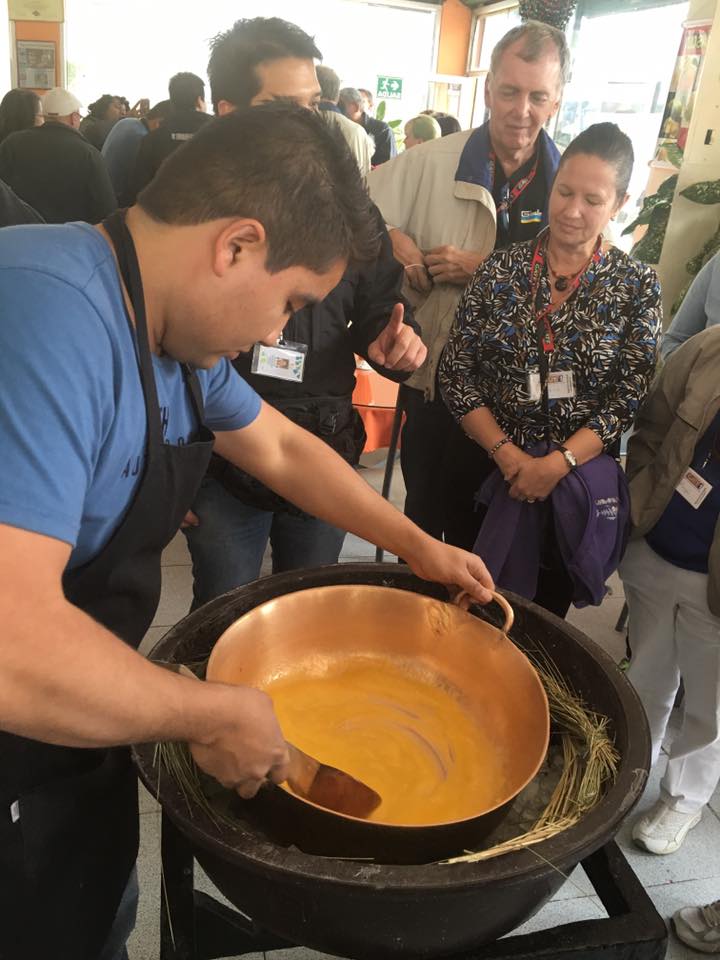 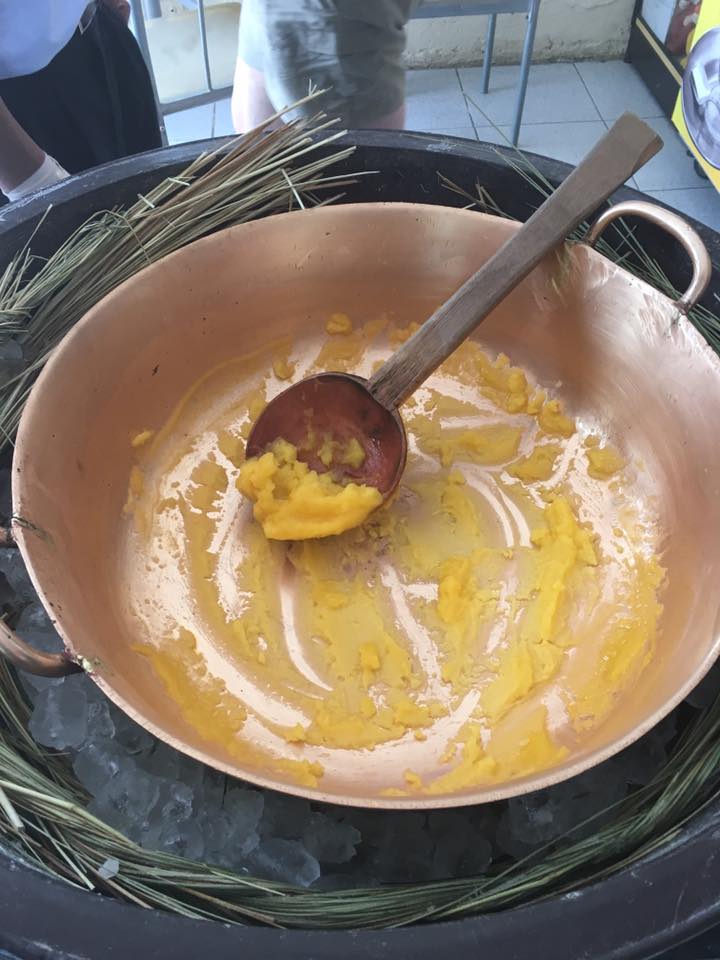 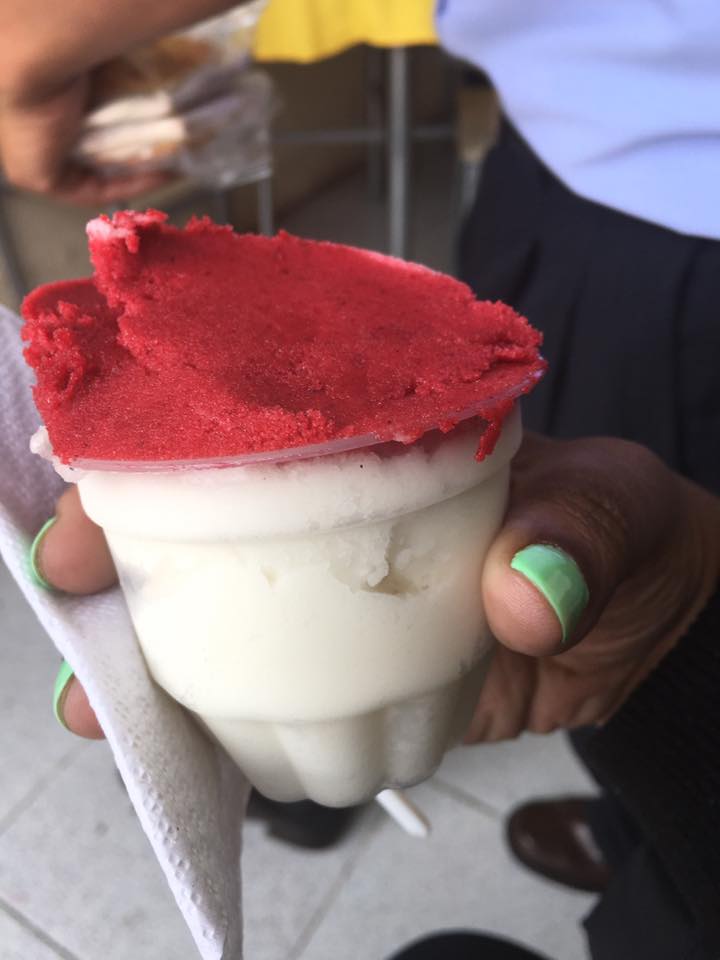 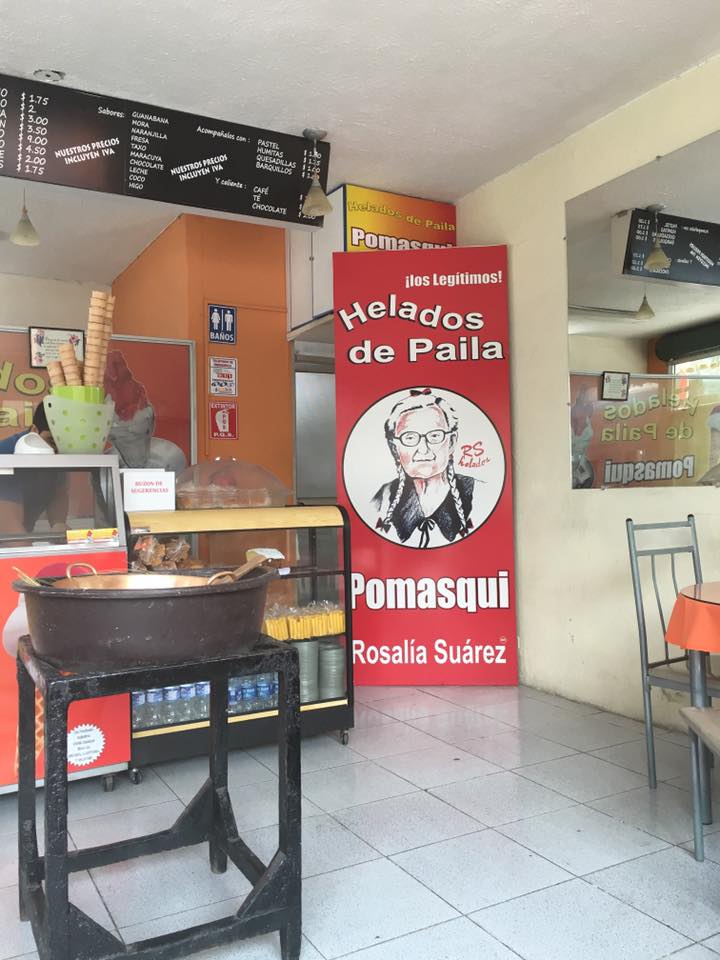 As we drove towards Otavalo, we stopped by a #foodmarket that happens to occur every Tuesday. By observing the food market, one can gather that Ecuador is big on fresh produce, fish, and meats. Things are SUPER cheap. For example, you can buy four empanadas for $1. At the food market, I tried a cooked dish of Irish potatoes and lamb blood. It is cooked in this massive pan and it seemed quick and easy enough.

I cannot stress enough how delicious this was. Literally….OMG! I ate WAAAAY too many of these. Bizcochos, which are the Ecuadorian version of biscotti (from Italy), means “double baked” and are buttery biscuits made out of a mix comprised of wheat flour, yeast, sugar, margarine and salt. We got to actually watch how it is was made, from how the dough is stretched, twirled and cut to how it is baked in a brick oven. Imagine sampling double baked, lightly crusted "biscuits" of sorts accompanied with cheese and dulce de leche, depending on whether you are looking for savory or sweet. Of course, I sampled both.

Here is some more information on its origins: http://www.visitecuadorandsouthamerica.com/bizcochos-ecuador/

This special kind of buttery flaky pastry is found most prominently in the town of Cayambe, located just an hour North from Quito. These buttery biscuits have its origins in Spain and they were introduced to the continent when the Spanish settled in the 1500´s. They became especially popular as snacks for those taking the train from Quito to Ibarra or San Lorenzo. This is the specialty of the inhabitants of Cayambe, which is why  you can find plenty of small stores in this small town where bakers mold the dough into this golden buttery sticks all day long, almost 24/7. There are shops making and selling bizcochos all around the town, and one single shop makes about 1,500 of these buttery sticks, per day!

NOTE: One thing to realize is that there are SO many places baking #bizcochos in #Cayambe. However, be sure to search for places using a brick oven. We were told that it makes a huge difference in taste. Some places use a regular oven, hence their advertising is misleading.

Watch it being made here:

When we visited a local #Quechua home, we saw yucca used in a variety of ways. The two major ways I got to experience #yucca was boiled and as a fermented drink called #chicha. The drink, depending on how long it has  undergone fermentation, can be very tangy and sour.

Here is some information on its origins: http://soundsandcolours.com/articles/ecuador/chicha-an-ancestral-beverage-to-feed-body-and-soul-7430/

“For centuries, chicha, a fermented beverage made from cereals, fruits or roots, has been taken by various indigenous tribes in many parts of South America. All over the Ecuadorian Amazonian rainforest, the Kichwa communities have been using fermented yucca roots – also called manioc. In these areas, the traditional beverage is an intrinsic part of their culture.  The chicha dates back to thousands of years. It has always been considered a sacred beverage, a symbol of fertility and celebrates the richness of the Pacha Mama (Mother Nature). Originally, the word chicha came from the expression “chichabh co-pah”, which means beverage made from corn in the cuna language, a dialect from Panama. Today, the drink is offered to welcome visitors. More so than in other places in the Amazonian rainforest, in Canelos and in other remote areas, the tradition of drinking chicha has survived and is part of the daily diet. For breakfast, lunch, dinner or whenever one feels thirsty or hungry.” 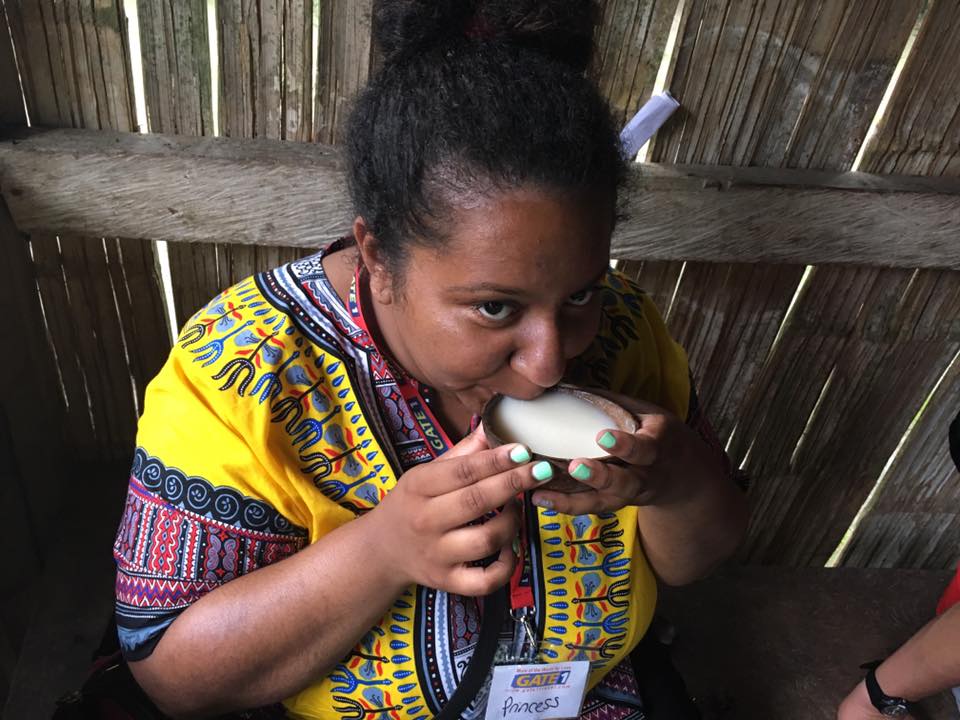 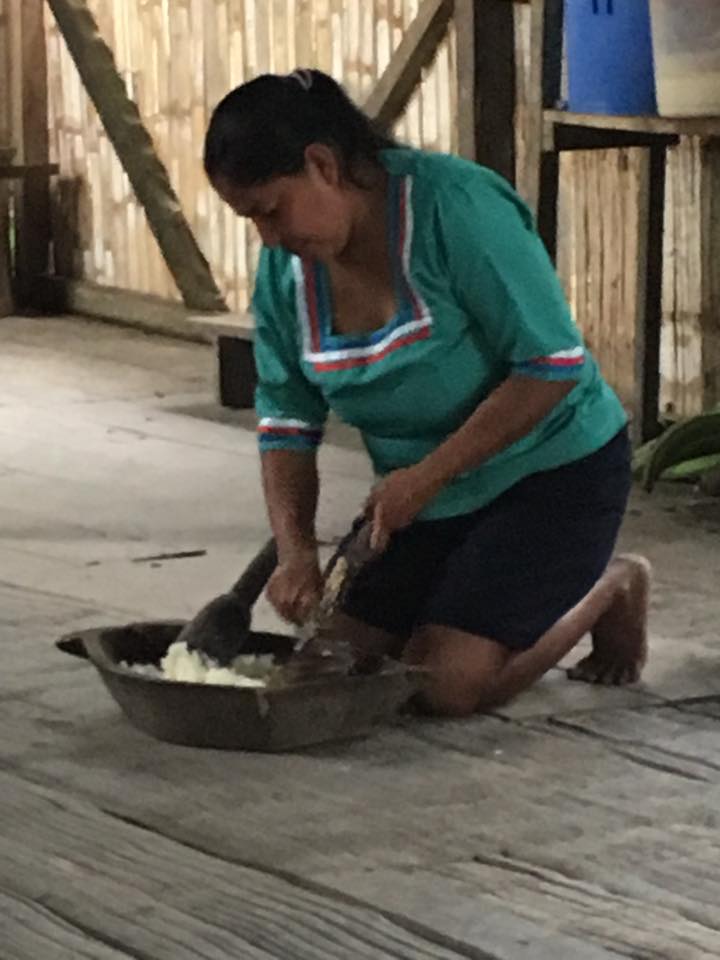 Ecuador surely loves their empanadas, whether they be savory or sweet! Everywhere you go--the street market, the side of the road, a fancy hacienda, you see them. They are so quick to make and sold for dirt cheap. Apparently people have it as a snack at all times of the day and can also be an appetizer for breakfast or a light lunch.

Some places make a huge one that fills your entire plate like you see pictured here. 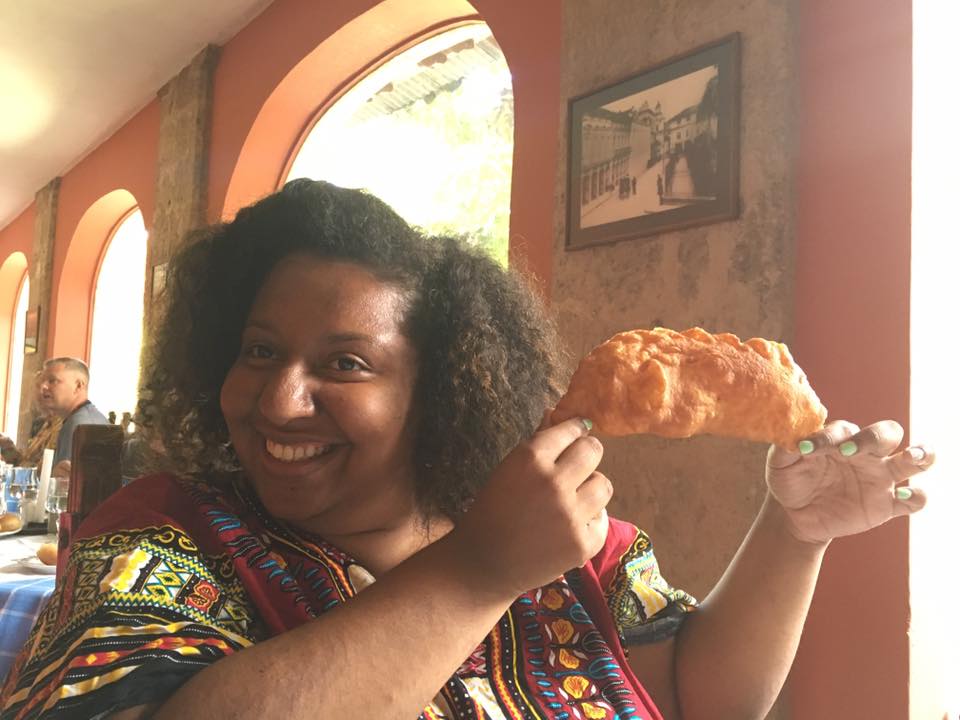 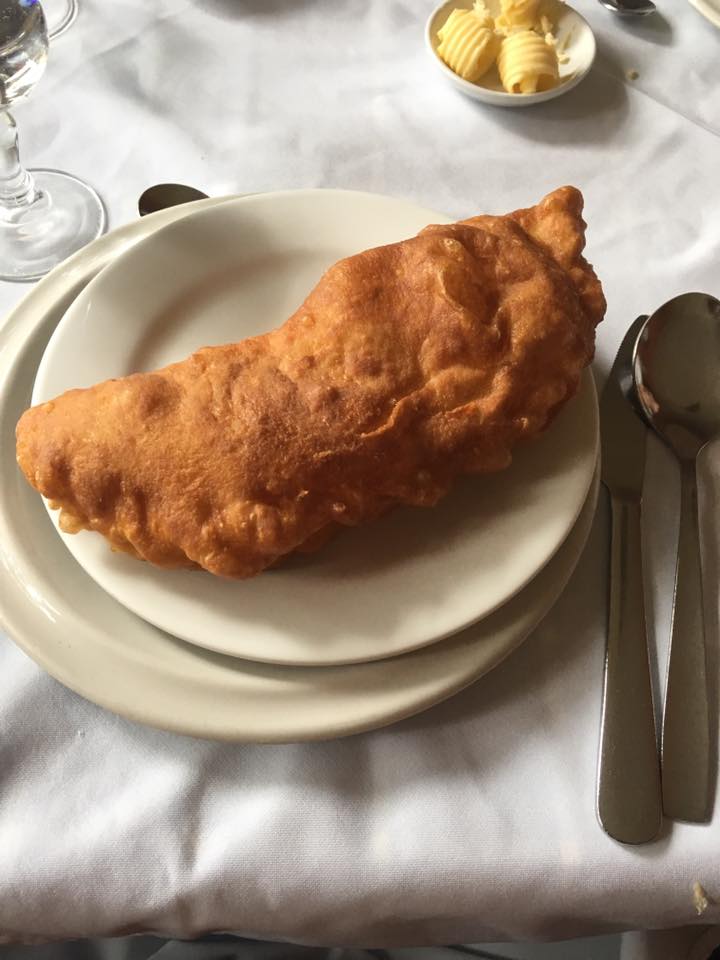 What makes the empanadas "Ecuadorian" is granulated sugar, sprinkled on top, just after they are removed from the hot cooking oil. Despite it having a savory cheese, it is quite delicious.

Here are some food facts for you: http://southamericanfood.about.com/od/snacksstreetfood/r/Ecuadorian-Fried-Cheese-Empanadas-Empanadas-de-Viento.htm

The word viento means “wind”, and the joke is that these empanadas (a popular street food snack) typically have a very stingy amount of cheese inside and are mostly filled with air! The #empanadas puff up when they are fried in oil, and will fill with air no matter how much cheese you stuff into them. So don't blame your local street vendor if your #empanadadeviento seem to have more air than cheese! 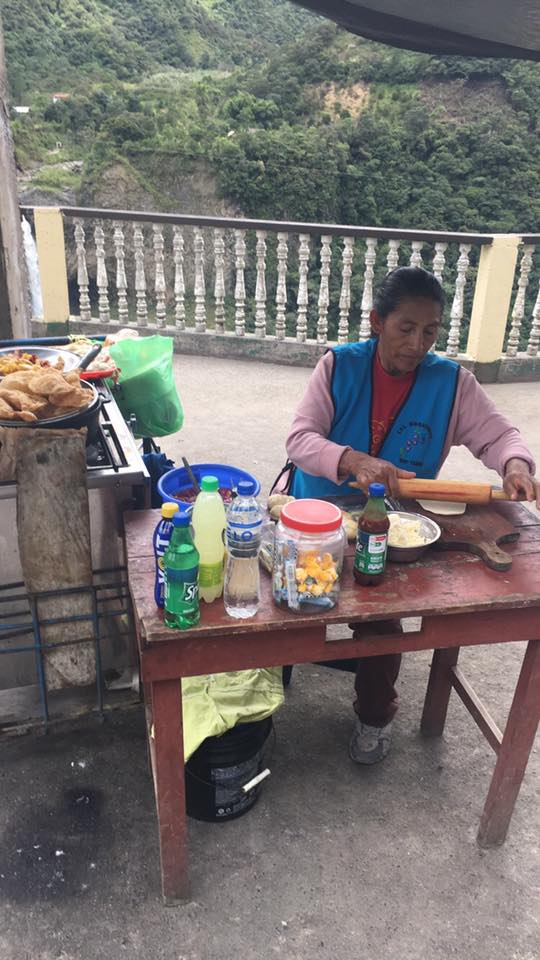 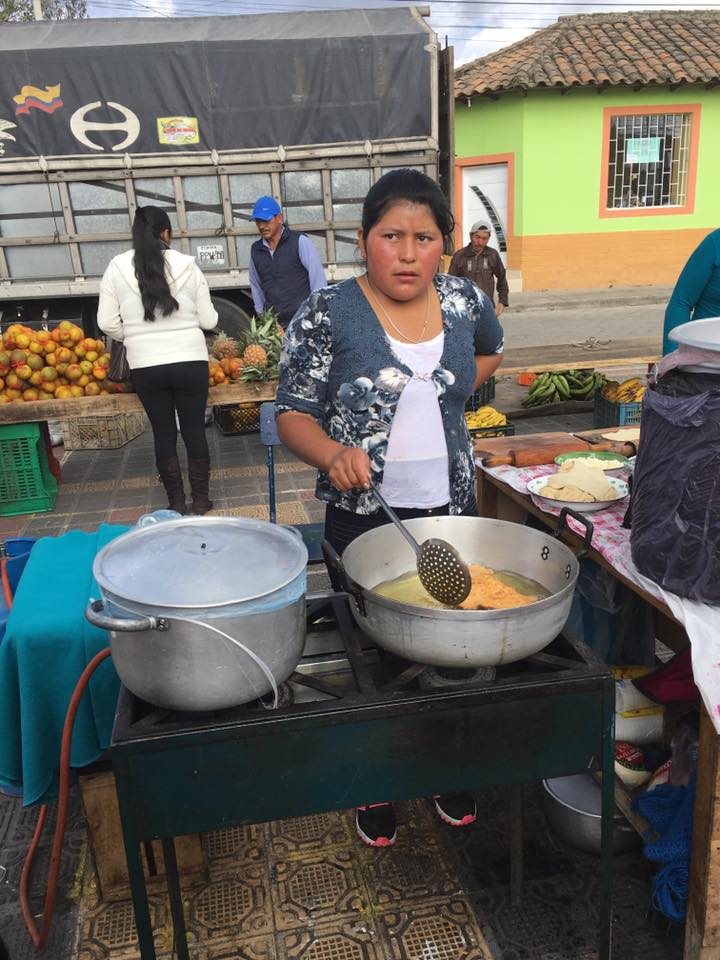 Check out a video of the empanadas being made on the street:

What is the best food item you have tried in Ecuador?

What is something you want to try? Comment below!

Let's Taco About It: Best Food Spots in San Diego