I’ve always been intrigued to go to Seattle, Washington. Having had a few people ask me why, I had to really think about it. Seeing Pikes Public Market and the Space Needle in pictures always caught my eye. Also, being the lover of Starbucks that I am, I wanted to see the first one. I also think that it being a central location in the West Coast (a place that I have not ventured to often) was one of the reasons that inspired me to visit. Oddly enough, my original plan was to do a National Parks tour during Thanksgiving Break. However, that tour was cancelled after I booked my airplane ticket. Instead of backing out, I decided to plan my own itinerary. In the process, I realized that Seattle has much to offer! Everything happens for a reason! Deciding to spend three out of my five days in Seattle, I had to really maximize my time. Here is how you can maximize your time.

Museum of History and Industry

On the first day, I allowed time for some leisurely walking. My first stop was to the Museum of History and Industry where I learned about the evolution of Seattle. Again, not being familiar with Seattle, I knew little about its history. However, what struck me was the major fire that occurred during the 1900s that essentially destroyed all of #Seattle. It is why there is there is an "Underground City" , which was built on top of what was destroyed.

Moreover, I did not realize how many innovations began in Seattle. In addition to #Starbucks, online shopping, cell phone networks, and the Boeing flight had its starts here too.

The other fascinating thing about Seattle is its population. I did not realize that there was such a large Asian population as a result of Seattle trading with Asia. However, because many major corporations are rooted in Seattle, it has also changed the population makeup. Apparently, 62% of the population are transplants. I am quite curious of how that has altered Seattle's "culture" and how natives feel about this!

You can literally spend all day here as there are so many food places to check out, whether it is the freshest seafood, fruits and vegetables, doughnuts, or even barbeque! Although known for its food, there are lots of little handmade crafts, souvenirs, and other items you can shop for as well. Opened in 1907, #PikePlaceMarket is considered to be one of the oldest continuously operated public farmers' markets in the United States. A great way to sample the range of items it has to offer is through a #foodtour. Through Viator.com, I was able to book a “Food and Cultural Walking Tour of Pike Place Market" organized by Savor Seattle. For two hours, we walked around and sampled from eight spots including the famous Pike Place Chowder and Beecher’s Handmade Cheese. The philosophy around the public market was summed up to me as "FLOSS," or fresh, local, organic, sustainable and seasonal. Not only did I come out feeling nearly full, but I felt more educated about the food and culture scene of Seattle. The food is really amazing and fresh! For more information on the foods I tried, check out my blog post, "Making the Most of Seattle’s Food Scene." 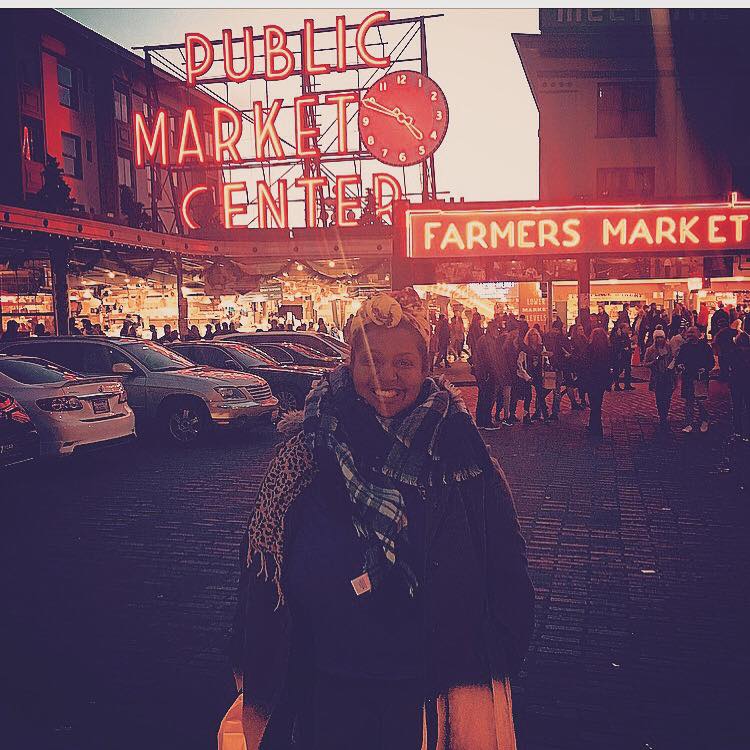 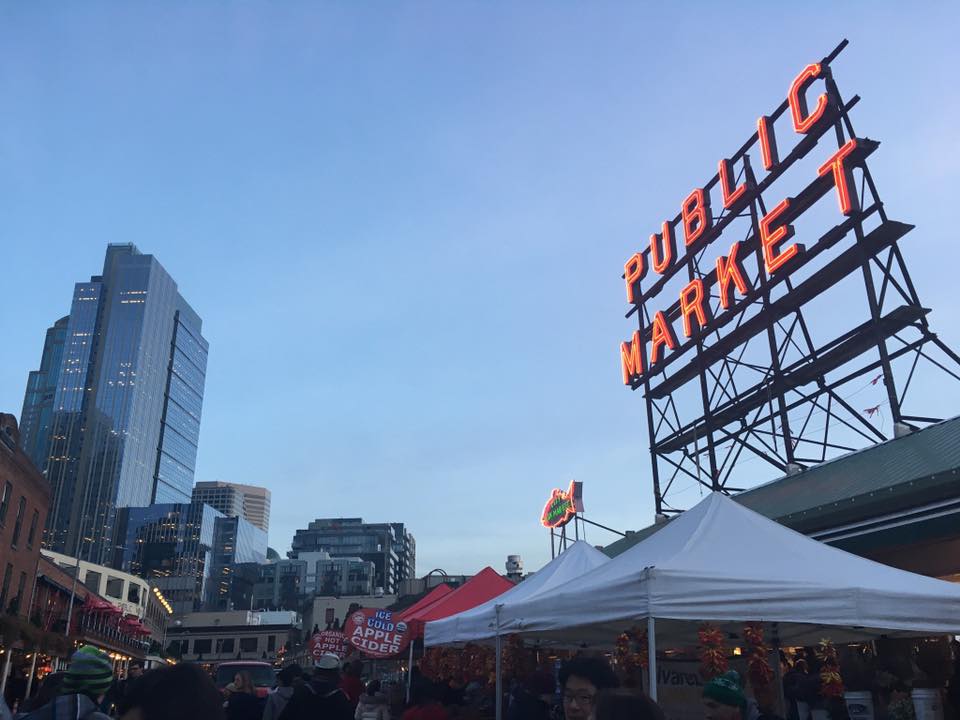 Right under Pike Place Market is #PostAlley, accessible by going down a ramp where you will see lots of posters stuck on the walls, otherwise known as "sticky art." There is also the infamous, second germiest tourist attraction in the world: the Gum Wall! I am sure you are wondering where the first is! The #GumWall started in 1993 with...well you guessed it, sticking their gum on the wall as they waited for a show to start. However, they would place coins in the gum. Eventually, theater workers gave up on cleaning it; becoming a huge tourist attraction!

Around Pike Place, you will find the "first Starbucks" with the old logo and fonts. Established in 1971, a fire caused it to burn down the very first location, resulting in the owners asking for the license to be switched to the current location at 1912 Pike Place (since 1975). This is technically the fourth location as after the first location, the next Starbucks were established in other parts of #WashingtonState. There is nothing different about the drinks offered or the taste of the drinks offered. However, there are lots of options of roast coffee beans and souvenir items you can buy! TIP: The lines can be very long! When I passed by at around 2-3 PM, the line went out the door and down the block. However, when I returned around 6 PM, the line was very short. The later you come (before closing time – 9 PM), the better!

The good thing about Seattle is its quick access to neighboring islands. I took a quick 35 minute ferry to #BainbridgeIsland, which has scenic view gives the ultimate feels of a quaint town. Despite it being very small, there are a number of things that can keep you busy, which are all within walking distance from each other. During my time on the island, I ate brunch, tried a bakery and iced creamery as well as visited the history and art museum. If you are looking for more details about how to spend a day on Bainbridge Island, check out my blog post called "How to Spend a Day on Bainbridge Island.”

On my last real day in Seattle, I spent it exploring some of the most popular spots. There is a reason why they are popular! Starbucks 40th Floor This spot is a hidden treasure! In researching where to find the best views of the Seattle skyline, this location came up. It could not be more accurate! If you head to the #ColumbiaTower in Downtown Seattle, you can take the elevator to the 40th floor and find the Starbucks. Of course, to not be a complete freeloader, I would recommend at least making a purchase. Sipping on my chai tea latte, I sat near the windows appreciating the views! 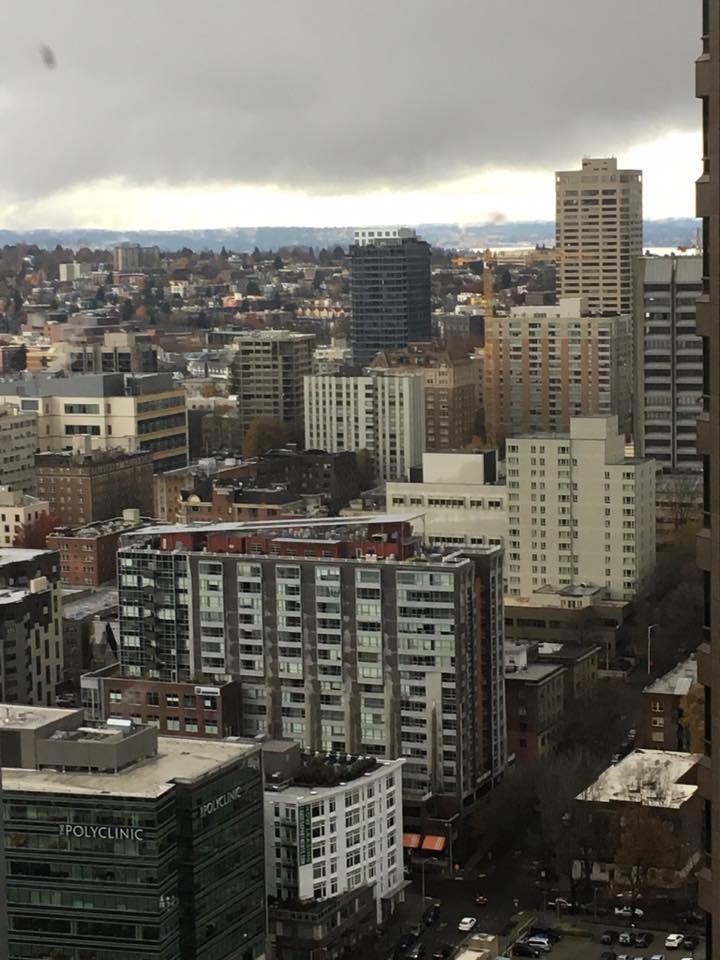 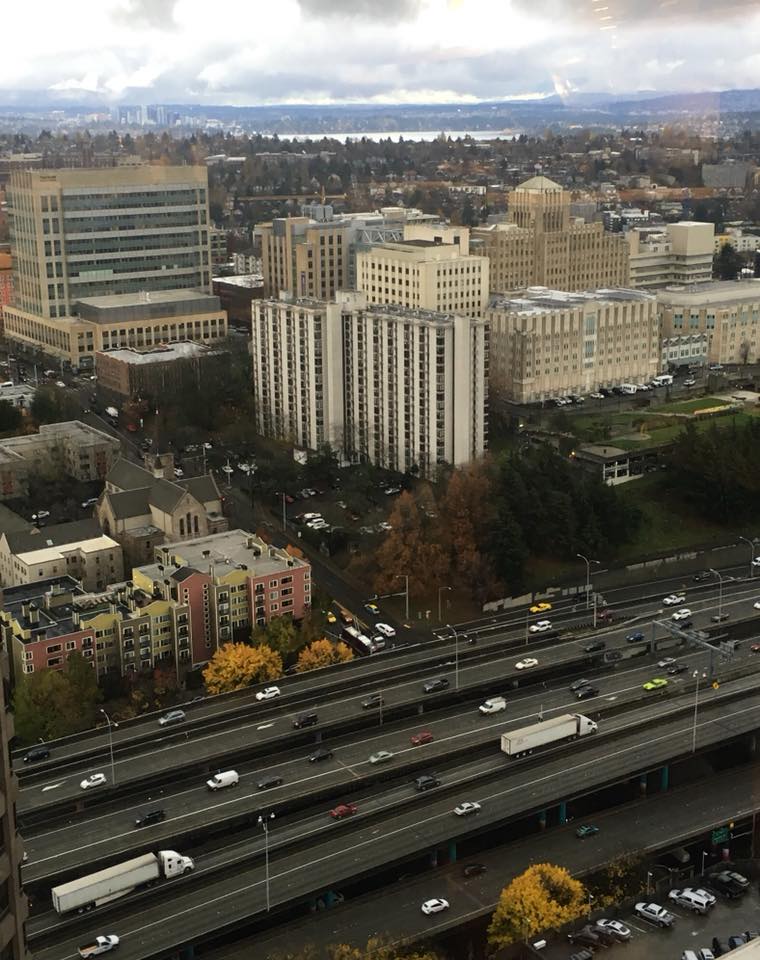 I am very much into museums and pop culture. As such, a place that combines the two is just the place for me! Some people know this museum as the Experience Music Project or EMP Museum. However, since it is evolving to be more than just music, it is now called the Museum of Pop Culture, or #MoPOP.

Founded by former Microsoft billionaire Paul Allen and designed by the famous architect Frank Gehry, the exterior architecture of MoPOP is the first thing that captures your attention. Inside, there is a range of exhibits such as David Bowie, Jimmy Hendrix and Science Fiction. The most interactive was the sound lab, where you get to try to play different instruments on your own. Most of my time was spent on The Jim Henson Exhibit. If you love the muppets or want to take a trip down memory lane with shows such as Sesame Street, the extra $5 is worth paying!

One of the most unique museums I have checked out is the #Chihuly Glass Museum, located next to the Space Needle. Although Dale Chihuly's glass work is known around the world, it was cool to see a curated concentration of his work. The tours explain the concept behind the work and how it was created. You will be simply blown away by what you see! Pictures do not do it justice! TIP: I would recommend buying the package deal that gains you entrance into this museum as well as the #SpaceNeedle Observatory. It saves you $8! 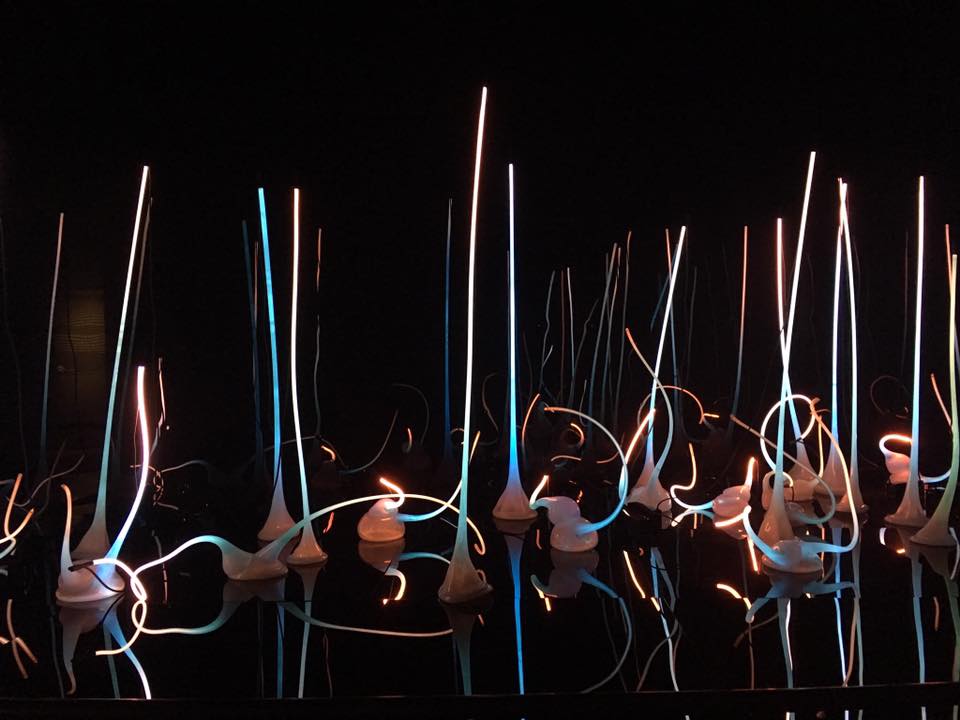 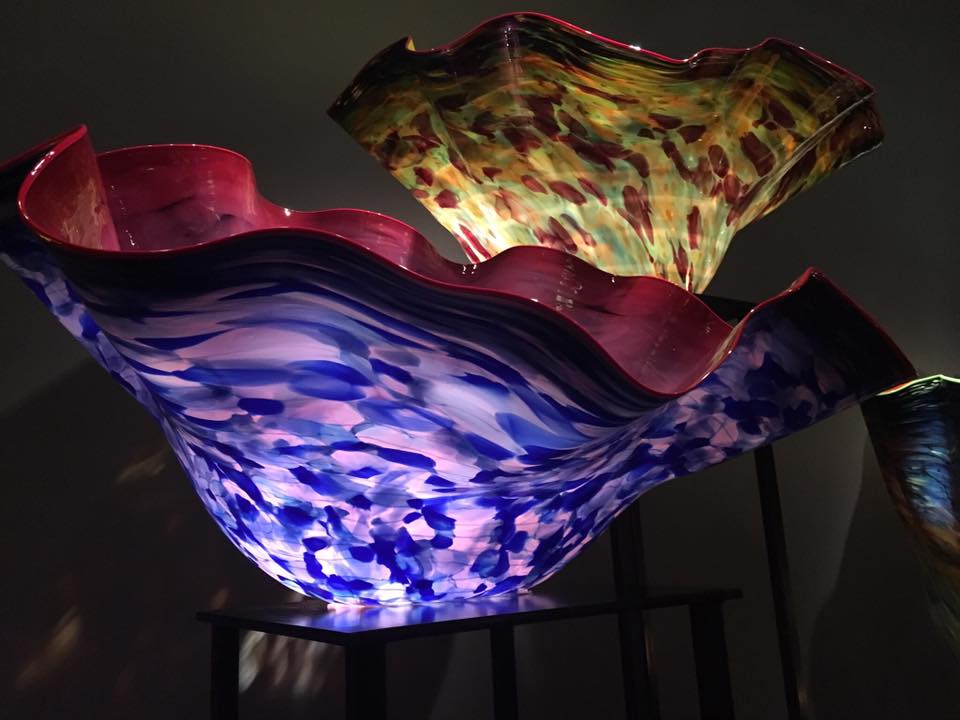 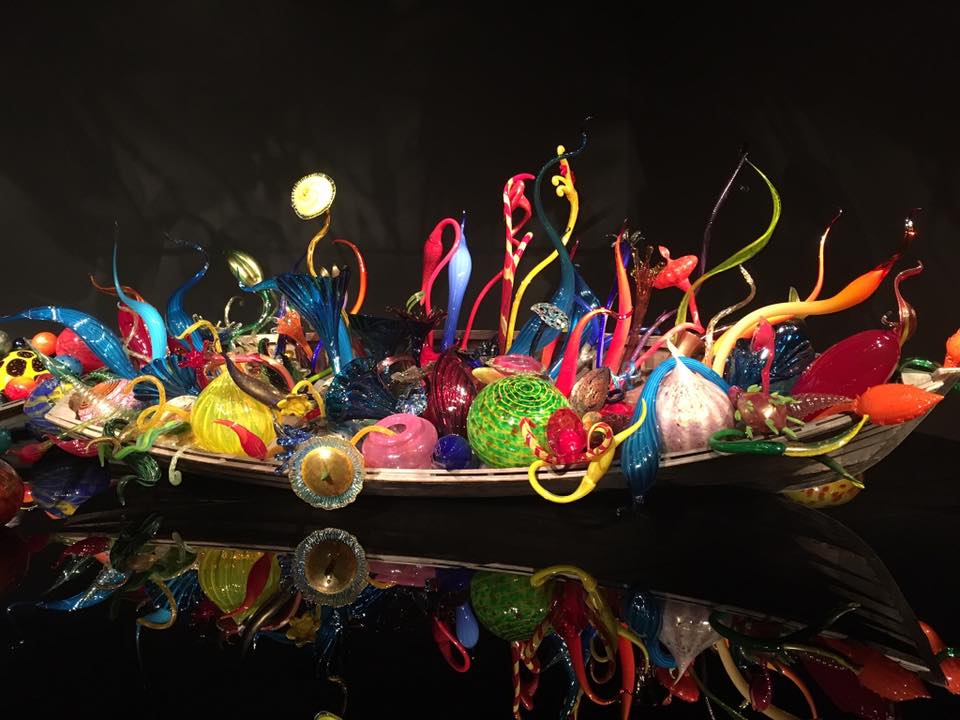 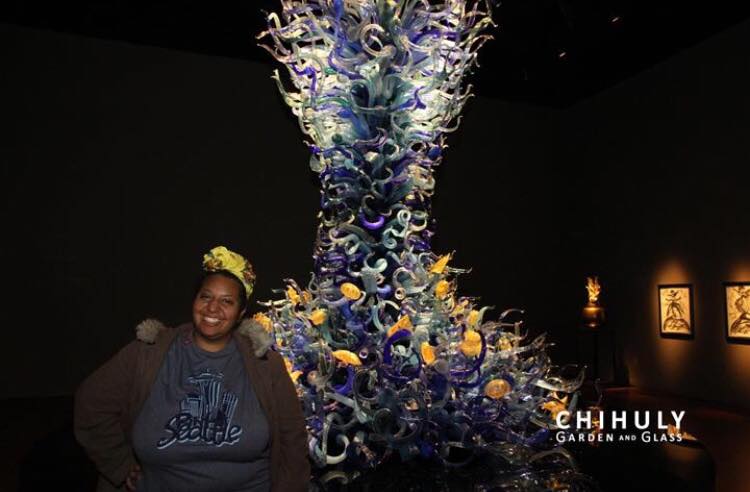 I, at first, was going to bypass this. However, due to the request of a friend and my inner passions, I decided to cave in and check it out. I am glad I did! The first reason is the amount of history you learn about the Space Needle on your way up to the observatory through photos and detailed descriptions. The second reason is for the view itself. Although it was freezing and windy up towards the top, it was the most expansive night view of the city! 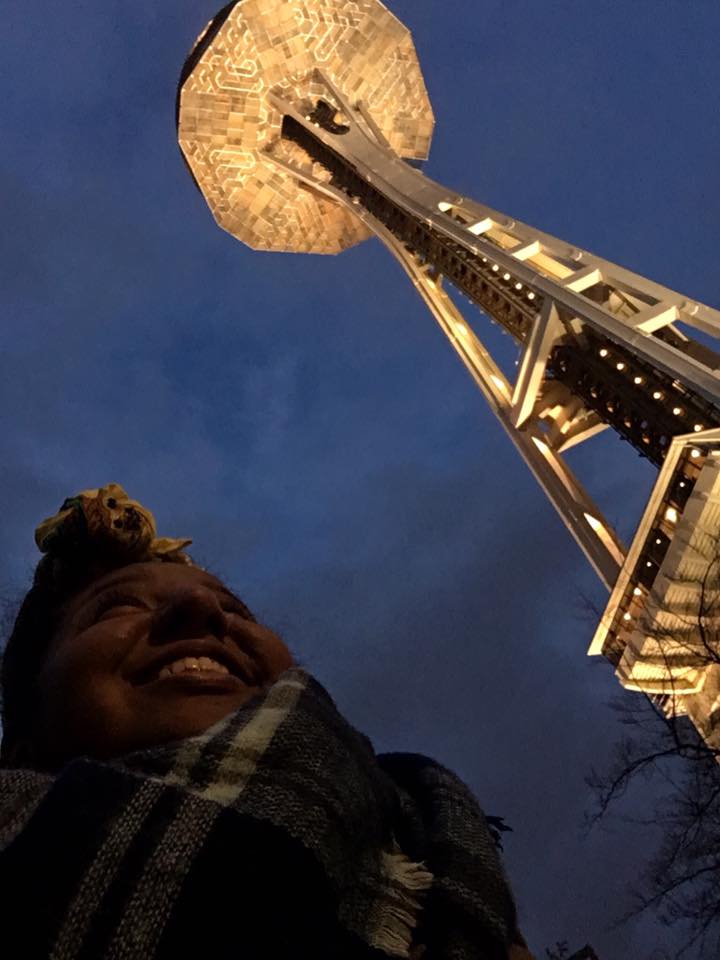 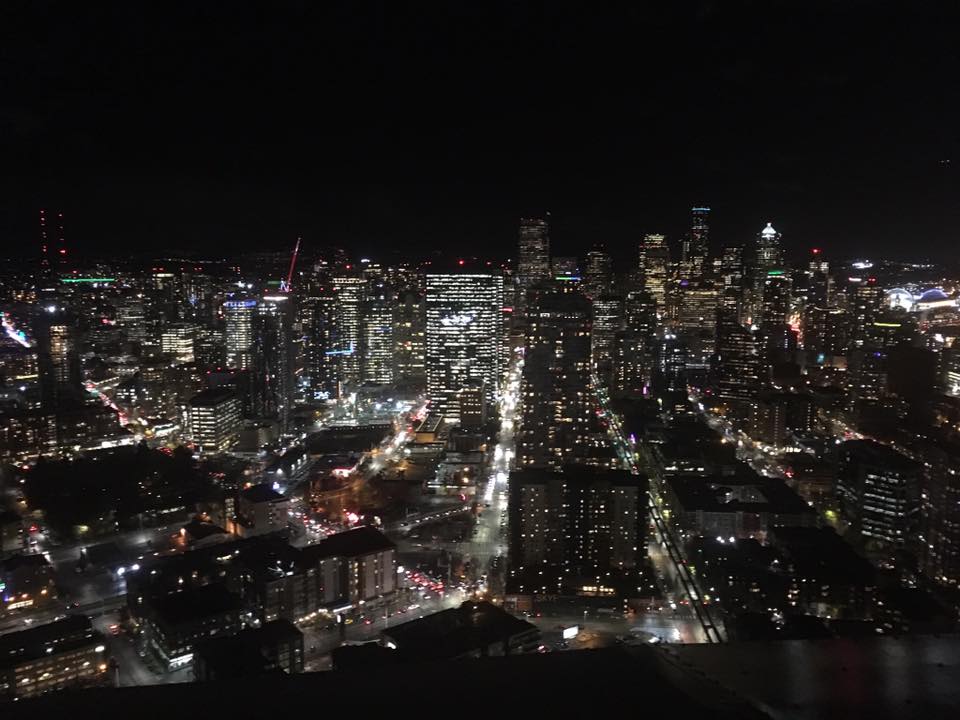 What are your favorite things to do in Seattle?