My Clapbacks against Caribbean Stereotypes: We are More than "Reggae and Rum"

I am not going to lie. I am writing this article as a productive way to channel my anger and disbelief after reading an Instagram post from a “travel influencer”, an example of how sweeping generalizations and #stereotypes are broadcast to a large audience (nearly 250,000 followers), turning the narrative ugly.

Yes, every race and ethnic group has misconceptions and stereotypes. The #Caribbean is definitely not immune to this. However, as a person with Caribbean ancestry, this hits close to home. With that, I am here to unpack the statements from this post with the intent to not bash this travel influencer, but instead rewrite the narrative as a black travel blogger.

Yes, the Caribbean has some of the most beautiful beaches and resorts in the world. Crystal clear blue waters and white sand beaches - one of the major reasons why people flock to the Caribbean each year. However, the Caribbean is not just a land of #beaches and resorts. Like anywhere else, there are big cities. People live and work on the island, just like you would in the United States and Europe. There are also other terrains as well - lush mountains and forests, flowing rivers and waterfalls. One must actually get away from the world class resorts to see that! 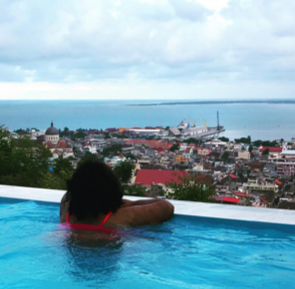 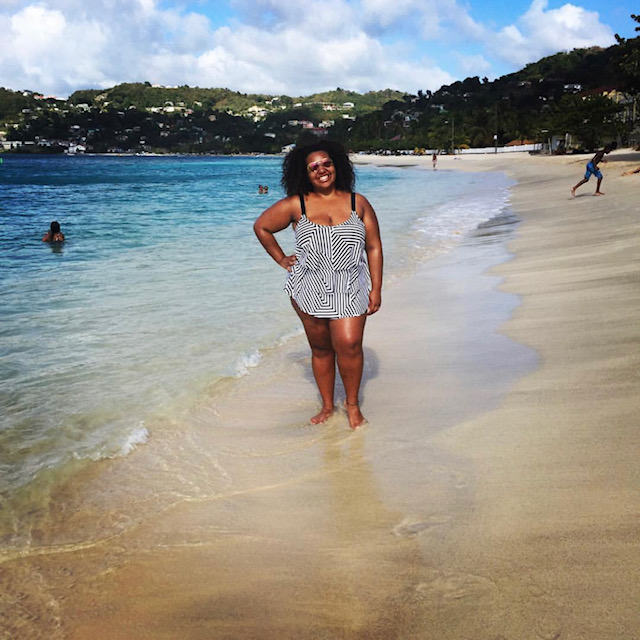 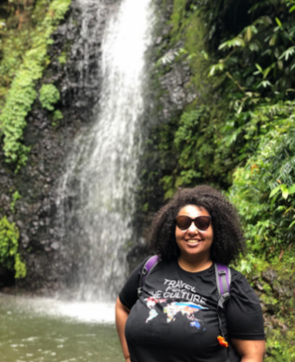 Caribbeans are friendly because we are taught hospitality as a culture, something that we could learn more as a society. However, I believe that Caribbeans are stereotyped to be extra nice because of this misbelief of super chill and super lazy - just kicking back smoking weed and sipping coconut water. In reality, recreational marijuana is illegal in essentially every Caribbean country (except Jamaica) since February 2015. In reality, Caribbeans are working their butts off to serve tourists just to make ends meet.

Ok, yes, rum was invented in the Caribbean and you can find tons of distilleries in Caribbean countries (sadly,  mostly owned by white families because...colonization!) We take pride that year after year as we land on the top of lists for best rum in the world. However, that does not mean we only drink rum! Like anywhere else in the world, there are a variety of other drinks to choose from.

John Watling's Distillery in the Bahamas

Thinking the Caribbean is a #reggaeculture is simply ignorance. Pretty much, you are saying that the entire Caribbean is Jamaican. One cannot question the mainstream popularity of "Bob Marley." However, there is no absolute way that  you have truly explored the Caribbean and have only heard reggae. There is calypso, soca, and steel pan, which originate from Trinidad and Tobago. There is zouk from Martinique and Guadeloupe, dancehall from Jamaica, merengue, bachata and reggaeton in the Dominican Republic, salsa in Cuba and let’s not forget kompa and Haiti. You will hear top 40 music blasting from radios as well!

Sentiment 4: Cricket and soccer are popular

Don't get me started as both sports have been made popular in certain cultures because of #colonialism. Cricket originated in South East England, which makes sense why many former English colonies in the Caribbean and around the world plays the sport. The history of scorer can be traced more than 2,000 years ago to ancient China. However England "transitioned" the sport to what we know today as "football." I'll leave that there for interpretation.

Although cricket and soccer are featured the most on this Google search, peep that their are other sports featured too like polo and track

Shall we open an Earth Science or Geography textbook? Yes, the reason why people love traveling to the Caribbean is because of its consistent, warm tropical climate. There are more nuances to the weather. There is also variation from the tropical rainforest to the tropical savanna to just plain arid. The temperature and precipitation is going to mainly depend on elevation. However, for the most part there are two seasons: rainy and dry.

Rainfall map from Caribbean Regional Climate Centre. Clearly there is huge variation of rainfall across the Caribbean

This actually caused the most uproar in comments for GOOD reason! Telling a Caribbean person that their food is bland is like slapping their mamma in the face. Now if you just ate the resort, that would make sense. The Caribbean has so many flavors, whether it is jerk seasoning from Jamaica, Creole flavors in Martinique, Guadeloupe and Haiti or Indian influences in Trinidad. Considering that live in a Caribbean community in the USA, I am surrounded by all those flavors daily.

Haitian cuisine. As you can see I LOVE rice!

Sentiment 7: Things are 2-3X more expensive than in the USA

Well, well, well. It is interesting that we are willing to pay crazy amounts of money when we visit New York, San Francisco or London, but not the Caribbean. Just because our money goes further along, does not mean that  we should not be spending our money to help the local economies directly. Again, are you shopping at a gift store at the resort? Or are you buying from a local on the street or at a market?

Purchasing a head wrap that I loved while walking around the streets of Pointe-a-Pitre, Guadeloupe

Let's all get into a lesson of economics. In order for an island to receive goods not produced on the island, it must be imported, which comes with shipping costs and import taxes. For example, a can of Coca Cola (which is available all around the Caribbean) is going to cost more in the Caribbean because it is not native to the islands. Martinique and Guadeloupe are actually France in the Caribbean which means that they are using the euro like you would in France (which means things will cost more).

This right here hits at the jugular coming from a white man. If you have ANY understanding of history, then one would understand that this is a result of #colonization wiping out the entire #nativeculture. For example, the Taínos inhabited most of Cuba, Jamaica, Hispaniola (the Dominican Republic and Haiti), and Puerto Rico. However, as a result of the spread of infectious diseases from Europeans when they landed in the Caribbean, entire populations were wiped out. When I traveled to the Bahamas, an artist talked about how people today still have issues around identity because due to their loss of native culture and later being colonized by the British. Instead, people predominantly of West African descent,  now inhabit these islands as a result of...SLAVERY!!! Don't be mad that we are trying to hold on to this land!

MORAL OF STORY: As we are currently celebrating National Caribbean American Heritage Month, there needs to be more of our people telling OUR story. We know our story the best. We need to celebrate our accomplishments while acknowledging and embracing our struggles as a region.

As a black Caribbean American travel blogger, I strive to tell stories from the black perspective and also show that our people can travel too around the world

Interested in what some of the Caribbean islands have to offer? Check out below. 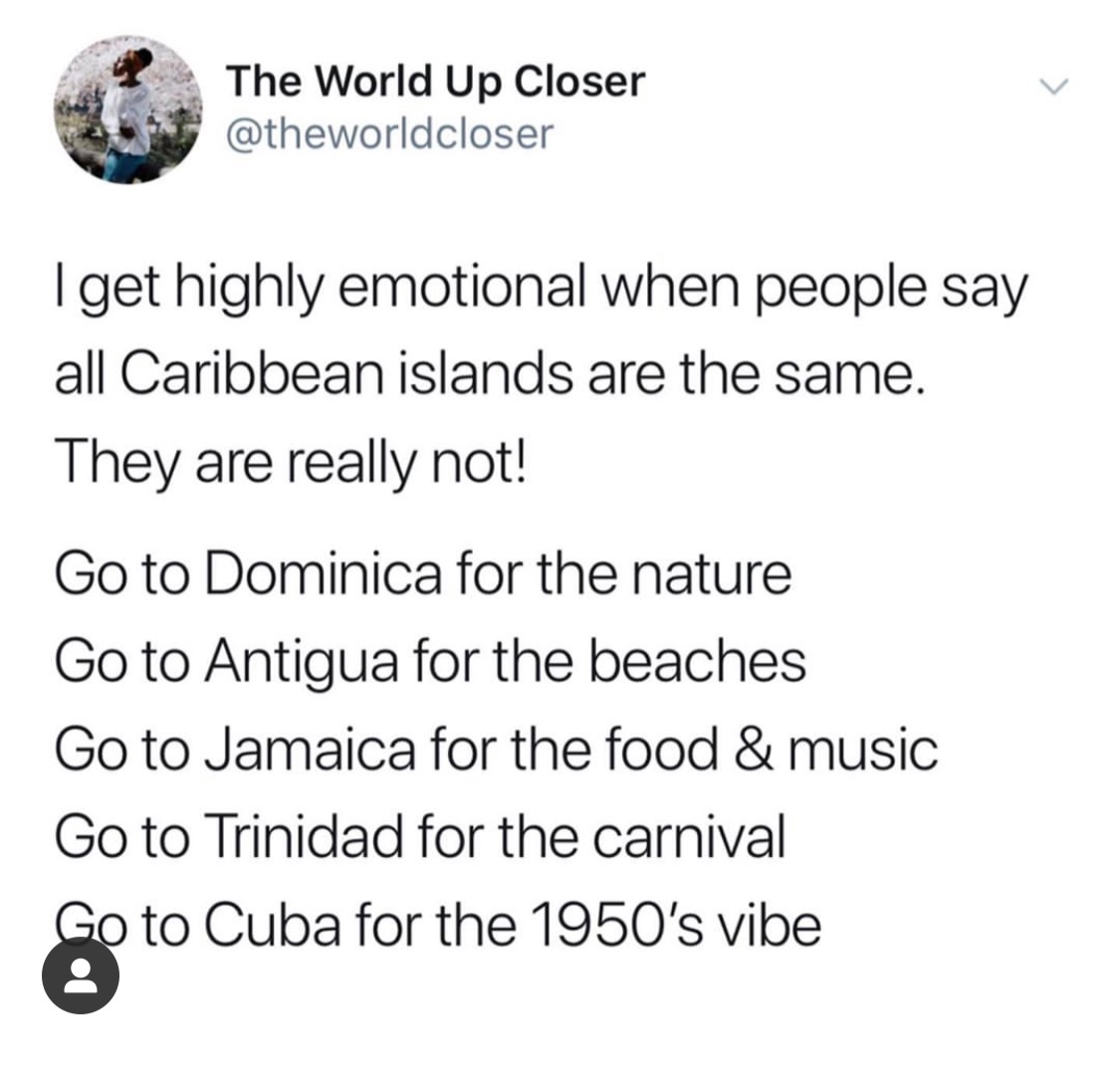 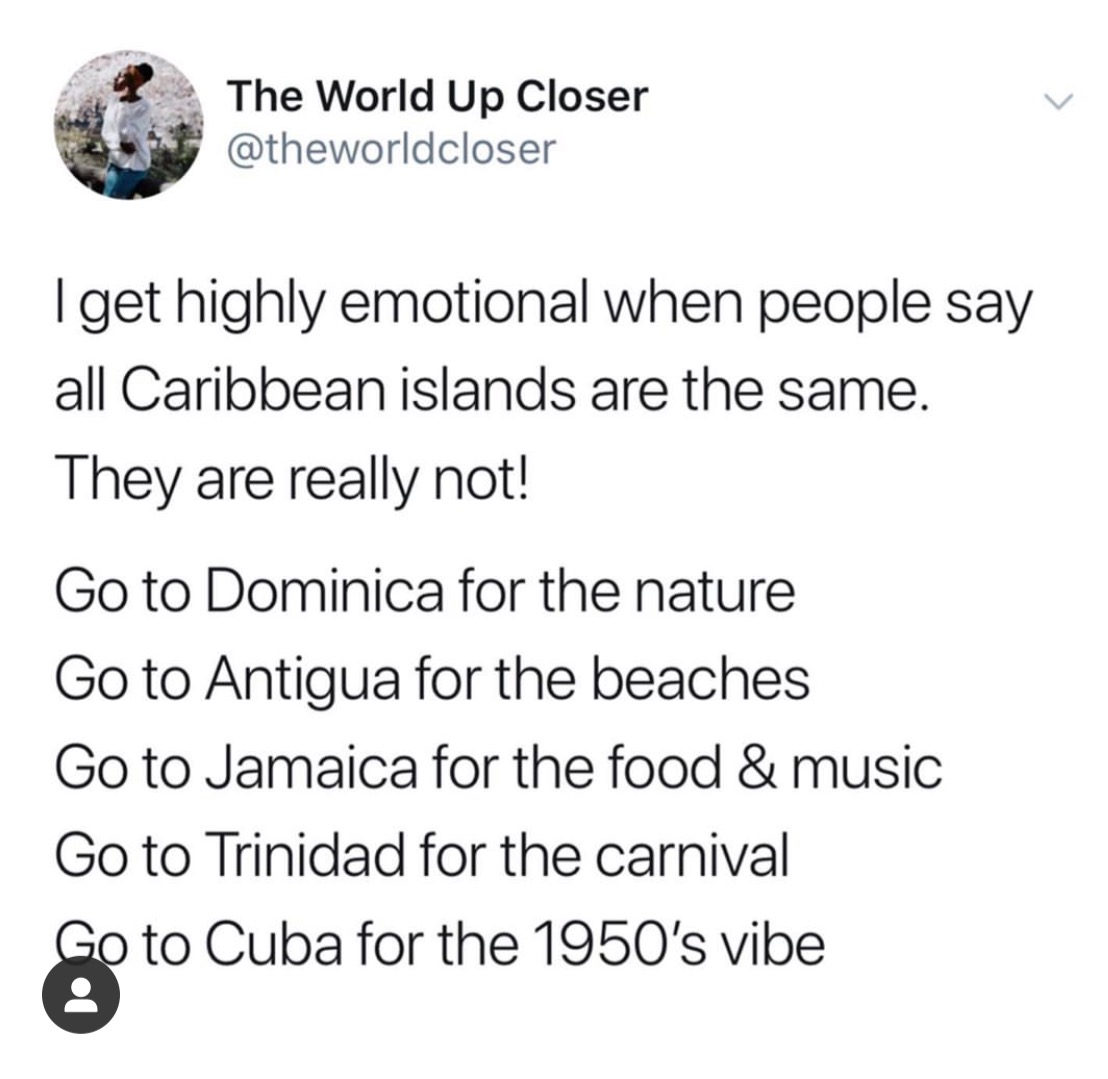 What motivates you to travel to the Caribbean?

What do you love about the Caribbean?

Dear Travelers...You Can Decolonize Travel, Too -- Here are 16 Ways